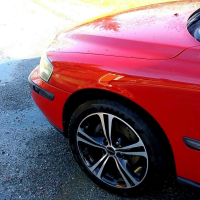 av jiha1968 -  tor 07 jan 2021, 19:59
-  tor 07 jan 2021, 19:59 #1422346
Yes, it rises the suspicion towards the Evap.sensor, but it's also expected to get a rise in heater air temp when air isn't extra cooled/dried bye the Evap. core,
especially with low heater efficiency.
It's also normal that the heaters air temp gets somewhat lower with at near to max Fan speed,
especially with low heater efficiency and low outside temp.
Those symptoms should be less exaggerated when cabin temperature has stabilized after a longer drive,
because then the heater system would have some spare heating capacity to regulate "more heat" when the fan moves colder air faster through the H.core.
So we might be looking at a climate system with a defective Evap. temp sensor, a heater core with low efficiency, with some trapped air in the core....
Time will show

PS: Recirculation should always be Off anyway, except in shorter periods like in a tunnel when outside air quality gets very poor.
Cars with AQS-sensor has an "auto" position on the Recirc. button, but usually the sensor is dead and expensive, so Auto** and Off usually gives the same result...
Dark LED on Recirc button = off/normal , Orange LED=Recirculating, and eventually a green LED=auto recirc, depending on signal from AQS-sensor at cabin air intake)
** Auto "separated" from the global CCM-auto button

Yes, my car has the AQS sensor and as you state, this is dead. And my car-mecaninc says the same thing. This sensor is dead on 90% of the cars we check

Btw. When I change the heater core and coolant next time, is there something I can do to prevent air from getting trapped?

Refill until coolant runs out of alu-pipe,
then also pinch the connected hose (2),

remove pinch from hose 1, (towards the middle of car), and reconnect hose,
Remove pinch 2 and continue to refill system.

Some air will get trapped somewhere anyway, but usually it will escape through the expansion tank after thermostat has opened .
It may take a few rounds of heating / completely cooling off, with refill between, before most of the air is expelled.
Remember to use distilled water to dilute the glycol. (if not premixed)

PS: no need to change all coolant, pinch off heater hoses, suck out coolant from heater core (tube in engine bay), replace core...
and if it's possible to "work cleanly", then old coolant may be reused after filtration (coffe-filter?)
Senast redigerad av 1 jiha1968, redigerad totalt 0 gånger.

So I just came back from the dealer (Bilia) where they had no less than 2 mecanics looking into this issue for almost two hours.
First off they did the whole CCM/Flaps-calibration thingy. It came up with some minor error-codes on the first run through VIDA, but these were no issue and easily removed.
They then did a thorough reading of all the values/temp on the Evap. sensor and the interior cabin sensor, both came out fine after several readings.
Then, they did a new run of calibrating the flaps, all individually, checking reference values in VIDA, and cross tested things.. everything came out near perfect.

So, their next suggestion, was for me to go on with the heater core replacement, and as you said, be certain that no air gets caught when adding coolant.
To them, it seemed like the issue being concentrated to the fact that the heater core is not able to deliver correct temperature, and that the budget core I have installed just does not have enough flow for some reason. They did have som examples of customers coming in with these cheaper versions complaining about low temperature. So might be something there.

Tomorrow I will go ahead and change the heater core again, after your instructions. I´ll be back with updates

After changing my cheap aftermarket heat core with a BEHR/MAHLE heater core the cabin heating system is like new.
I pinched off the hoses, sucked out coolant from heater core, and topped off lost colant after the replacement of the core.

The result came almost instant, and cabin heat was better than ever. After a couple of drives, the coolant level dropped, and I have kept on topping it off, each time letting the car run for minimum 30 min with the cap on the coolant tank removed.
Heat just keeps getting better.

Thanks for all help :)